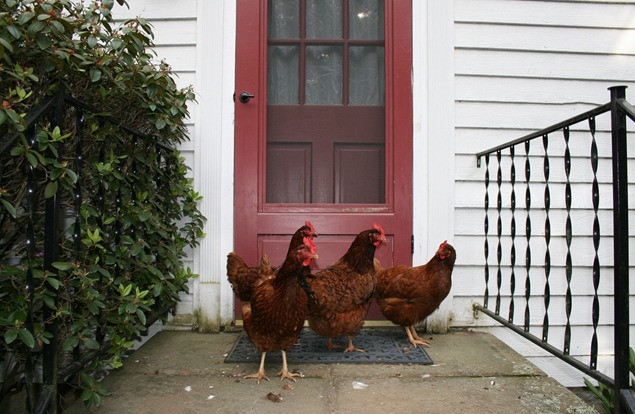 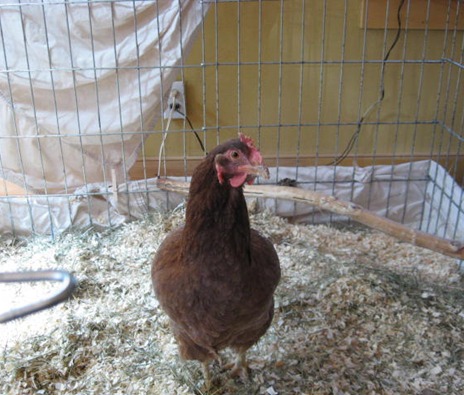 (Excerpt from the Essentialbird Yahoo group)

Queen Elizabeth is my friend Jason's Rhode Island Red chicken who almost died a couple of months ago. QE developed an infection of the proventriculus about three months ago. Jason took her to our local vet, was given antibiotics, the antibiotics helped a little, but then QE would relapse and the vet would prescribe higher doses of antibiotics. This went on for two months until Jason felt that there was nothing more he could do. He did not want to euthanize QE but the vet suggested this as the best course of action. As a last resort, the vet gave Jason one last antibiotics to try, and at that point, Jason brought QE to stay with me (in an 8 by 5 foot dog pen in my kitchen) as he was going on vacation.

When QE arrived she was 2.5 lbs, down from her normal 5 lbs. This is an awful thing to see. Her crop was blown up with infected food and water, she was vomiting, her eyes were glazed, her crown was pale and flopped onto her head, she had diarrhea on her vent, and she would not eat. The vet told Jason to administer the antibiotics via the mouth, but since the crop wasn't moving, I knew the antibiotics would not get into her blood.

I called my vet (not local) who suggested that there was infection below the crop, in the proventriculus, so I began rubbing Original Swiss Aromatics thyme thujanol onto her proventriculus - 5% in sesame oil, about three drops once per day. I also put the antibiotics down her throat at the same time. In addition, I used neem leaf tea as her water; and neem leaf powder, Primal Defense probiotics, liquid Kyolic and pineapple (enzymes) in her food. I fed her about five to seven home prepared meals per day with the supplements mixed in, things like breads soaked in soy milk, pasta with sauce, warm potatoes and yams, salads with flax oil dressing (for calories), baked salmon with olive oil - you know, the usual stuff you feed chickens:)

The supplements were meant to stimulate her digestion and appetite, and the foods were meant to put on weight. She improved steadily on this protocol, but the most interesting response she had was on day five when I stopped the thyme thujanol (to give her a break), while continuing with all the supps and the antibiotic - and she completely relapsed - vomiting, anorexic, etc. As soon as I resumed the thyme EO on her proventriculus, she recovered and began eating again.

After five weeks QE was back up to 4.75lbs! I tapered her off all of her supplements successfully and she seemed fully recovered. Here is an update from Jason after QE has been back home for one week, I thought it might brighten everyone's day to hear this:

"Its actually been really beautiful. She spent that night inside in the
crate in the kitchen, but the next morning we began integrating her.
Her first day back with the flock (Wednesday) she was a little
alienated. She would wander around a little away from the other hens.
But then about 9:30 she started pecking around with all of her sisters.
At 10 I checked on her and she was taking a dust bath in the sun, and
she had such a look of joy on her face. She took that dust bath for a
good half hour, rolling from one side to the other, sticking her feet in
the air. That first day I saw her take several dust baths like that.

It was like she was washing the human world off of her.

Toward late afternoon I sequestered her in the hen house and mixed up
her special meal with the soy milk, chicken feed, and probiotics. She
ate the majority of it, but not all. I got smarter in the following
days and mixed in twice as much of the probiotic 1/2 tsp. because she
only eats about half the plate. After her special feeding time, I leave
her with the hen house door open and eventually the other hens will
either figure out they want to clean the plate, or QE will come outside
and mix back in with the group.

She is very human centered, but has regained some of her chicken ways.
On Wednesday and Thursday she would follow us back toward the house
after we visited with her. Now she doesn't. She's also begun to run,
wiggle, and squirm when you reach to pick her up (like the other
chickens do).

Technically, she is probably 3rd on the pecking order. I'm not sure.
But she has interesting habits. She hangs out with the lead hen (Tori
Amos) often. They both are the first and the most persistent to show up
when I emerge from the house with a new food item. She also has a
special relationship with the beta rooster (Lotto). They hang out
together often. I have been a little worried about this, because I
wasn't sure if that meant the alpha rooster (Bud) wasn't accepting her
back in his harem. Usually, he gets pretty miffed if Lotto is near a
hen and separated from the rest of he flock. But now, I don't worry
about it so much. Bud accepts her, but she has some sort of special
status whereby she can hang out with Lotto if she wants. ( an option not
open to the other hens).

I've never seen them pick on her, though she is a little different.
When the alpha hen decides to chase another hen off a morsel, most hens
run in a circle and end up where they started. QE runs in a line and
separates herself from the group, then slowly reintegrates.

Here is QE after her recovery (on the far right): 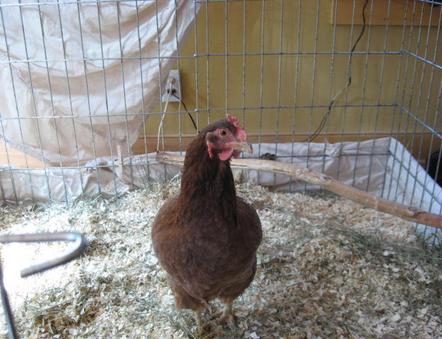