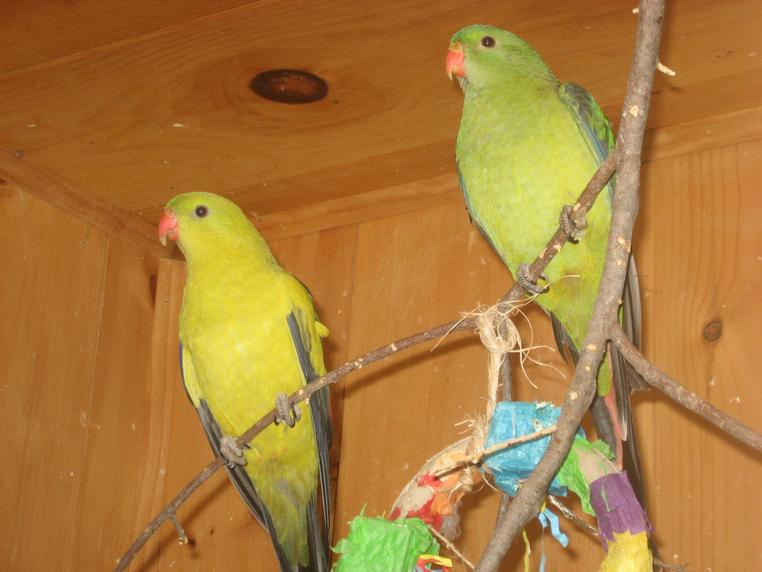 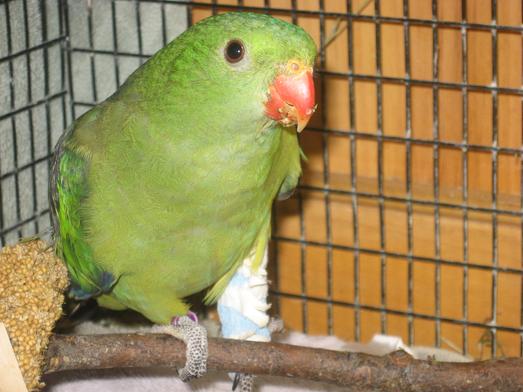 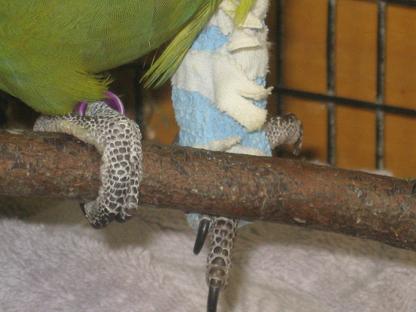 During breeding season, my Rock Pebbler Lila caught her toe in her nest box opening and broke her tibiotarsus (the main, large leg bone). When I first discovered her, the bone was protruding from her leg in a bloody matt of feathers and tissue - it looked like she would need amputation as my vet confirmed a few hours later.

I urged the vet to try and save her leg, so Lila was immediately rushed into surgery (this would have been about six hours after the time of the break and I do think this type of break requires same-day attention) during which the vet was able to realign the bone and apply a rigid cast. The cast was too heavy for her to move her body much (see photo below), which I guess was just as well because the vet insisted that Lila remain still for several weeks.

The vet told me to place Lila in an aquarium on towels to prevent her from moving too much, but I didn’t have the heart to do this so I set up a three foot by two foot hospital cage for her with perches about two to three inches off the floor which was covered with a soft towel. I placed her food and water as well as cuttlebone and eggshells all within reach of the spot she most preferred to perch. This way she didn’t have to move much to eat or drink. I placed paper towels under her tail to catch droppings, and changed these out a couple of times per day.

I was sent home with Baytril and Metacam. The vet told me that the biggest challenge for Lila would be infection of the wound site since it was an open wound. I don’t like to use Baytril for birds as I have seen fatalities follow its use on numerous occasions, but I decided to use it in this case because I could not access the wound to prevent infection locally since it was inside a cast. If I had used natural antimicrobials, I would have had to administer extremely high doses to prevent septicemia and I felt that this would have caused her too much stress.

I decided to use natural remedies to replace the Metacam which was prescribed for pain and inflammation. This way, the only pharmaceutical she would need would be the Baytril. For pain and inflammation, I used several essential oils placed on kleenex  about six to eight inches from Lila’s head: Young Living Idaho Balsam Fir, Young Living Frankincense, Original Swiss Aromatics helichrysum (they call it Everlast), and Young Living Palo Santo. I used all of these oils in a rotation, but only two or three at one time. Each dose was about three drops per oil placed onto the kleenex five times daily. It was very clear that the oils helped her immediately. Her eyes became brighter and she began  to move more easily to eat and drink etc.

In addition to the essential oils, I administered two diluted herbal tinctures directly into the beak three times daily. I used three drops of Herb Pharm comfrey root (which I feel is a safe brand of comfrey root to use short term for birds) and four drops of home-made solomon’s seal tincture. To administer the tinctures, I heated up a slurry of soy milk and raw honey (the honey absolutely must be raw otherwise it can encourage bacterial overgrowth) in a hot water bath until it was very warm to the touch. I then mixed seven drops of the slurry with the seven drops of herbal tinctures, keeping this mixture in a little dish inside the water bath, and administered the mixture via syringe after catching Lila gently in a towel. In order to avoid aspirating her, I only dispensed a couple of drops at a time, then waited for her to swallow. Note: birds really don’t like to receive nasty tasting drops delivered via syringe so I always use the soy-honey slurry and the hot water bath method for administering any drops via beaks, and this is how I gave the Baytril as well. It makes all the difference.

The comfrey root and solomon’s seal are two herbs that are absolutely miraculous with healing bones, ligaments, soft tissue and tendon problems. But broken bones particularly need calcium and other minerals in unusual abundance, so I made sure to scrape cuttlefish bone powder onto all of Lila’s food, and I gave her free access to cuttlebone, eggshells, mineral grit, fresh greens in a clothespin and the Whole Foods diet from this website.

In addition to all of the above, John and I took Lila outdoors into direct sunlight as often as the sun was available. I felt very strongly that sunlight would help with her mineral production and absorption, and she did seem to enjoy her sunbathing sessions.

My feeling was that the combination of the herbs and essential oils I chose would handle Lila’s inflammation and pain. But to check this, a couple of times I gave her Metacam and watched her reaction. It was very clear to me and to John that there was no change in her behavior or demeanor from the Metacam, so we concluded that the natural remedies were doing their job and we did not need to use the Metacam.

Lila had to go for weekly vet checks to monitor her progress. After two weeks she had her hard cast removed and a new hard cast installed for another two weeks. We could see from X-rays that her leg was regenerating soft tissue and bone. But, the vet insisted that I use the Baytril for a total of three weeks because the open wound was somewhat irritated by the casts. This is way too long to keep a bird on Baytril (in my view), but I complied because I didn’t want to lose the cooperation of this vet! As soon as I stopped the Baytril I began administering massive amounts of Primal Defense probiotics. I used about a sixteenth of a teaspoon in a little water administered via syringe twice daily for a week, then once daily for another week, and in addition, I placed extra Primal Defense on all of her food for several weeks.

After a month her hard cast was removed and the vet told me to keep her in her hospital cage for two final weeks. During that time I continued with all of her treatments. By the end of the final two weeks she was clearly busting out of the hospital, flying back and forth to get free, so it was clearly time to let her out.

It has been a couple of months, her leg seems perfectly strong, and we see no signs of pain or weakness. (Before and after photos below.)

Disclaimer:These statements have not been evaluated by the Food and Drug Administration, or by any veterinarian. All information, including any product or technique mentioned, is for educational purposes only. None of the information is intended to diagnose or treat any disease.