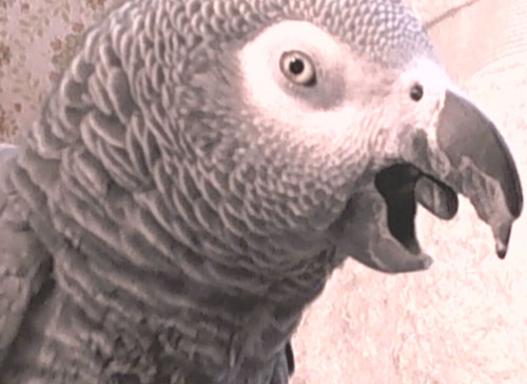 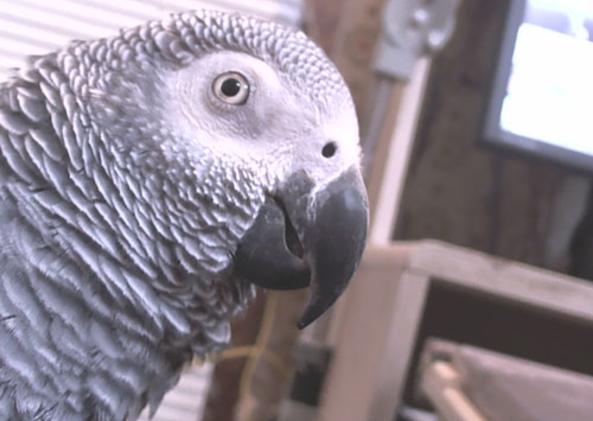 I have been working to help a 500 gram African Grey named Kenya who developed severe arteriosclerosis (clogged arteries diagnosed via xray) at age 15 after eleven years of eating only Harrison's pellets (95% of the diet). Kenya began having episodes of heart failure last fall where her legs would become paralyzed from restricted blood flow to the legs. The vet who ran the xrays said that Kenya's arteries were so narrow that blood could barely get through them.

As of October 2011, I had Kenya's owner, Dimitri, place Kenya onto a strict version of the whole foods diet, very gradually weaning her off the pellets. The new whole foods diet contained NO synthetic nutrients, but provided both organic garlic and organic cayenne pepper to help with Kenya's heart function. I show the diet below.

In addition to the new natural diet, I advised Dimitri to crush up freshly dried hawthorn berries (not the storebought capsules, rather we used a very special New York herb farm for these hawthorn berries called Healing Spirits) in a mortar and pestle and serve Kenya 1/4 teaspoon of freshly ground hawthorn berry powder twice daily (hawthorn information below).

When starting this program, I referred Dimitri to my vet Bill Sager and I consulted with Bill in 2011 about the entire situation before we started the program. Bill told me that in cases similar to Kenya's (he said he sees this type of heart disease caused by pellet diets "all the time"), the birds do improve on a natural diet, but he said the arteries would never go back to a normal size. I asked him if he had ever used hawthorn and he said no. As I mentioned, the X rays taken of Kenya in September 2011 showed extremely narrowed arteries, and now, after six months, new xrays taken about one week ago in early March, 2012, show a small improvement in the size of the arteries (they are getting a little bigger which is what we want).

In humans, studies using very aggressive diet programs with raw vegetarian foods (and no hawthorn berries) have shown a normalizing of the arteries on xray after five years, so it is a slow process.

(also to include her housemate, African Grey Zippo)

(NOTE: this diet is written for two greys because Zippo, though not showing symptoms, was on the same diet as Kenya, so both birds were placed on the same new diet.)

- one part spray millet scraped off the stalk

TO PREPARE: EVERY MORNING PLACE SEEDS IN MASON JAR WITH ENOUGH WATER TO COVER DOUBLE THE AMOUNT OF SEEDS. ADD 6 DROPS GRAPEFRUIT SEED EXTRACT PER CUP WATER TO THE SOAK WATER. LEAVE ON COUNTER FOR 24 HOURS. THE NEXT MORNING, RINSE THE SEEDS THOROUGHLY THROUGH A PLASTIC SPROUT TOP ON THE MASON JAR AND SERVE HALF THE PORTION. LEAVE THE OTHER HALF OF THE SEED PORTION IN THE MASON JAR, RINSED. AT NIGHT, RINSE THE SECOND HALF PORTION THOROUGHLY AND SERVE AS DINNER.

NOTE: all of the above must be fresh not frozen

NOTE: use each one of the above foods listed in any given month so establish a rotation for shopping such that all the foods are used within a month period

NOTE: ALL THESE VEGETABLES AND FRUITS (other than the nuts) SHOULD BE IN ROUGHLY EQUAL PORTIONS (JUST EYEBALL IT)

3. CHOP ALL THE VEGETABLES/FRUIT PLUS NUTS IN THE FOOD PREP (OTHER THAN THOSE THAT SHOULD BE CUT BY HAND):

USE ONE HALF CUP SPROUTED SEED MIX TO VEGETABLE/FRUIT/NUT MIX.

5. TWICE PER WEEK ADD:
- 1/2 teaspoon of ORGANIC FLAX OIL to morning meal (i.e. PICK TUESDAYS AND FRIDAYS AND FOR BREAKFAST ONLY THEY GET FLAX OIL)

NOTE: STORE FLAX OIL IN THE REFRIGERATOR AT ALL TIMES. IT IS HIGHLY PERISHABLE

6. ONCE PER WEEK GIVE ONE TEASPOON PER BIRD OF COOKED, FRESH or FROZEN, PLAIN WILD ALASKAN SALMON

7. TWICE PER WEEK GIVE ONE TABLESPOON PER BIRD OF COOKED BEANS (SOAK FOR 12 HOURS THEN  COOK UNTIL TENDER) - CHOOSE FROM PINTO, BLACK, KIDNEY, ADZUKI OR A MIXTURE

8. THREE TIMES PER WEEK GIVE 1/2 LARGE LEAF OF CHOPPED UP DARK LEAFY GREEN PER BIRD SAUTEED IN A LITTLE OLIVE OIL

9. BEFORE BED THEY GET ONE TABLESPOON PER BIRD OF SPRAY MILLET SCRAPED OFF STALK

NOTE: MEALS SHOULD BE PREPARED FRESH TWICE DAILY, AM AND PM. THE VEGETABLE PORTION CAN BE MADE FRESH EACH AM AND HALF CAN BE STORED IN A SEALED CONTAINER IN THE REFRIGERATOR UNTIL THE PM MEAL.

10. Kenya should be gently and gradually trained to exercise each day via flying sessions (to a chair, through rooms, etc.) until she is flying for at least ten or fifteen minutes each day.

11. HAWTHORN POWDER: 1/4 teaspoon twice daily from crushed powdered dried berries purchased from Healing Spirits Herb Farm in New York. Make sure to powder the berries before each feeding, do not store them.

UPDATE: As of January, 2013, which is about 15 months after Kenya began the treatment above, her heart function is good and xrays show that her arteries are less clogged (i.e. larger/have more room). Her liver and kidneys appear normal.

UPDATE: As of November, 2014, Kenya is still doing well on the above treatment plan.

Below please see Dimitri's photos of Kenya: the first is before she started the new diet (after 11 years of Harrison's Hi Potency as her only food);  the second is after three years on the new whole foods diet.

(Taken from the internet):

HAWTHORN ACTIONS:
The extract of hawthorn can increase blood flow to the heart muscle itself, helping to counteract one of the most common modern causes of death in industrial countries--heart attack due to lack of blood flow to the heart. In pharmacological tests on both animals and humans, hawthorn has been shown to improve the contractility of the heart muscle (which can lead to a stronger pumping action of the heart), increase cardiac performance and output, lower the peripheral vascular resistance (reducing the workload of the heart), steady the heartbeat (antiarrhythmic effect), as well as increasing the heart's tolerance to oxygen deficiency, such as might happen during stress or excitement, or in diseases where the arteries are partially blocked.
* strengthens blood vessels, including capillaries * strengthens the heart muscle * helps the heart muscle get more oxygen and use that oxygen more efficiently * strengthens the heart beat (= more blood is pumped in each beat) * slows the heart beat

*let me tell you about my personal hawthorn experience:*

i just lost a good friend to cancer. and it was the first days of dry warm summer (not hot) i was stressed, sad and maybe not had enough fluids or not eaten well.

had my husband get hawthorn (flower and berry) took 1 teaspoon. rested. drank fluids. had him stay close by in  case i passed out. i'd then need to go to e.r.
haha but my heart was compensating well.

pulse and blood pressure regulated within 15 to 20 minutes. but i took another 1 teaspoon dose 20 minutes after that. i knew it wasn't that large of a dose so i'd be ok. i so appreciate hawthorn.

this same thing happened again only 3 days later, on the day of my friends funeral. this time i knew i was not dehydrated. hawthorn worked for me again.
marguerite