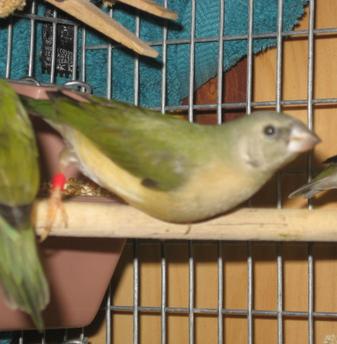 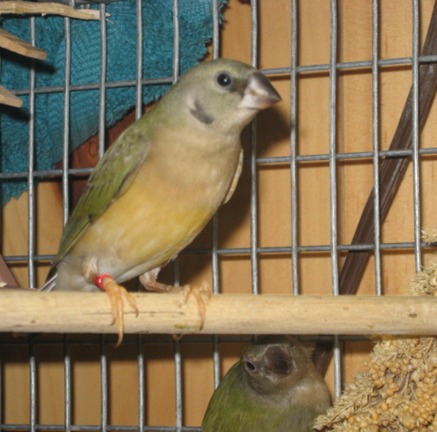 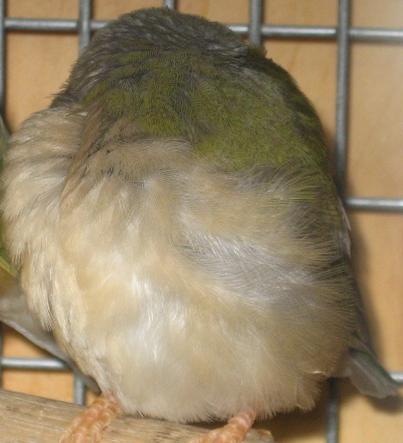 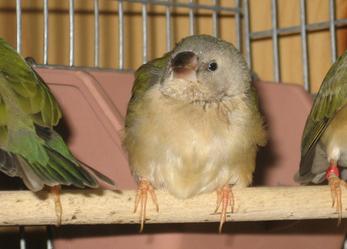 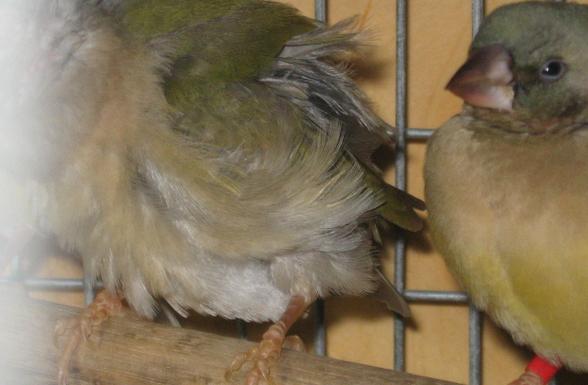 (Excerpt from the essentialbird yahoo group):

I have a clutch of five baby Gouldians that are about two months old. I recently placed them into my floor to ceiling aviaries with the adult Gouldians, as I always do so that the babies can develop flock and flying skills. It is easy for babies to get out-competed for food in this situation, so I always place plenty of spray millet bunches and seed buckets up high in the aviary for the babies to easily reach. Everything seemed fine for about eight days, the babies had tight feathers and were flying and eating well. Once in a while I caught one of the babies taking a day-nap, but since they all seemed fine, I wasn't worried about the day-naps (and well should have been).

One morning I noticed that one or two of the babies were puffy:

I pulled them out of the aviary and gave them diluted oil of oregano (essential oil) internally via syringe, as well as a heat lamp and spray millet at eye level under the heat. I figured that the oregano would knock out any bacterial infection they might have and would stimulate their appetites. The next day another baby was puffy (I pulled it out) and the following day I saw a day-napper so I ended up putting all five babies into their own hospital cage. They all puffed up and looked terrible. I assumed they had bacterial infections (Gouldians so often get bacterial infections that it is almost a given) and would respond to the diluted oil of oregano - but they didn't respond at all, in fact they all got worse.

At this point I decided that they did not have infections, since the oregano wasn't working, so I examined each one and realized that they were simply starving (breastbones were protruding) and had become too weak to eat. I'm not sure how or why this happened so quickly, usually I have plenty of time to pull them out of the aviaries if one looks puffy and get them eating again.

I began giving them drops of raw honey water from my fingertip in case they were dehydrated, and this helped - I could see they would perk up after the drops and try to eat. But it wasn't going to be enough because after twenty minutes or so they would go back to sleep in their puffballs under the heat lamp.

From the photos you can see how far gone they were. When young Gouldians look this puffy and glazey-eyed they usually only have a day or two left to live. So I decided it would be necessary to gavage feed them - something I have never done more than maybe twice (a whole lot more now since this article was written!). I prepared some powdered Lafebers hand feeding formula by mixing it with warm water and placing the mixing cup into a warm water bath to keep it from cooling down. I added Primal Defense  probiotics and very well diluted oil of oregano to the Lafeber's because I find that hand feeding leads to crop infections most of the time and I wanted to prevent this. I stirred the formula into a smooth, watery paste, thin enough to slide into the crop needle and up into the syringe.

I'm not sure exactly how dangerous it is to gavage feed a finch, but it feels dangerous. You have to use an 18 gauge crop needle attached to a plastic syringe. There is a ball on the end of the needle that must be placed down the bird's throat, safely, and this takes some finessing because the ball gets stuck at the back of the throat. In order to even fit the ball into the beak, I had to wedge the beak open with a toothpick sideways (left to right) while pushing the ball in over the top of the toothpick. As the ball went into the mouth, I had to somehow let the toothpick fall to the floor (not enough hands!). Next, without using pressure, I simply waited until the bird would adjust its throat or beak a little, which would create an opening and then I would gently allow the ball to slip down into the throat. At that point, I had to get the needle all the way down to it's base which is over an inch (feels like a foot). If you push too hard you can rupture the crop, so again I would let the needle slide down on its own without applying pressure, just waiting for the bird to squirm a bit and force the needle to move.

Once the needle was fully inserted I would push on the syringe very slowly to fill the crop with formula. The birds would squirm when they felt the formula hit their crops, so I made sure not to place any pressure on the needle such that the needle could puncture their crops as they squirmed. This was the hardest part because you have to use pressure to dispense the syringe, but you can't use pressure if the birds are squirming. I would push the syringe in very brief spurts but without pushing too firmly, if that even makes any sense. The whole thing is so terrifying that once you're doing it, you just sort of know what to do since you can see how easily the needle could push through the skin.

I was only able to get 1ml of thin formula into the babies before the formula would back up into the mouth. This is dangerous because the birds can quickly aspirate if this happens, so I had to stop at 1 ml and simply dose them more often, maybe six or seven times around the clock. I kept them up 24 hours because they were mainly sleeping as it was, and I wanted to make sure they would have the light to eat if they woke up. Too often when birds are starving, if you try to "let them sleep" through the night, they are dead by morning. After the babies had their formula, they would doze off and it was impossible to tell if they were going to recover or if they were dying - looked the same!

But after about two or three days of the feedings, I would go to catch one of them and they would be difficult to catch, so I would skip their feeding. They began to eat on their own some, and it was apparent that they were regaining strength.

Throughout this process, I placed a kleenex with five drops of Young Living Thieves blend essential oil under their heat lamp as Thieves, like oregano essential oil, not only cures and prevents bacterial infections but is a powerful appetite and nervous system stimulant. I added more drops a few times daily. The Thieves was very effective since it provided them with more and more energy to eat as they became strong enough to do so. I will be keeping them isolated for a few more weeks, but they are out of the woods and each one is eating on its own and too strong to catch easily now. Here they are as of today for comparison:

As you can see, too active to pose for photos, and feathers nice and tight. :))