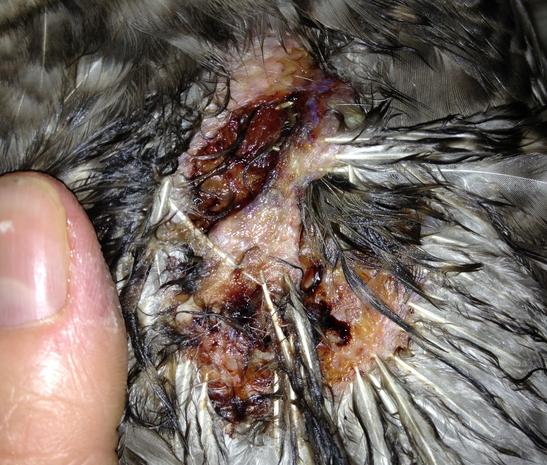 Leanne Burton called me Friday night to say that her chicken had been attacked by an animal and had a hole in the crop. There was a snail, feathers and hay packed into the hole, plus large wounds on the chicken's back with flaps of skin pulled off and folded under but still attached (see below). The chicken's demeanor was glazed over and in shock.

I said, um, you need to euthanize her immediately.

Leanne did not want to euthanize and had gotten her vet to prescribe her some Baytril and Metacam for pain. The meds were left for her but the vet was off duty until Monday and no other avian vets were available until Monday.

Leanne said she wanted to try and save the chicken so I stressed that nothing really mattered other than preventing systemic infection which I figured was basically impossible.

She began by cleaning the snail and hay out of the crop hole plus washing all the wounds with very strong neem leaf tea (made with one part leaves to just enough boiling water to cover the leaves). I also had her administering fluids/water/electrolytes right into the beak (yes some came out the crop hole!). Apparently the chicken could eat and was eating somehow (yes a little came out the hole). Leanne used two heating pads and made a heated cage inside her house, very very warm in there.

Leanne then went to Whole Foods before closing and bought goldenseal tincture:  I had her use twelve drops of goldenseal in one tablespoon of water and administer this into the beak. She used about five teaspoons per day until Sunday afternoon when she felt that the chicken was possibly going off her food due to nausea (I"m sure she was nauseous with this much goldenseal!) The idea was to prevent the crop from infecting on the inside which apparently was accomplished.

At the same time Leanne began basting the wounds with a very strong dilution of water and goldenseal tincture (almost half and half). I told her to do this every thirty minutes at least for the first couple of days - and not to sleep much overnight.

By Saturday Leanne wanted to use something to moisten the wounds as they were drying out from the goldenseal. I remember thinking, "why is she worried about a little dry skin when her chicken is about to die?" But she was, so we selected a salve with essential oils. Since coconut oil is antimicrobial, she used coconut oil as a base, adding about 2 drops of Young Living helicrysum and one drop of YL lavender essential oil per teaspoon of coconut oil.

Well...here we are on Monday night and the chicken went to the vet at four PM, but the vet said there was nothing to do! The crop hole had closed nicely, scabbed over and there was new skin already forming. He said that the skin flaps on the chicken's back were dead so he trimmed them off;  the wounds looked to be healing nicely and nothing to worry about.

So the next time you find your chicken half dead with snails crawling into wound holes on a weekend with no vet access - hey, no problem!