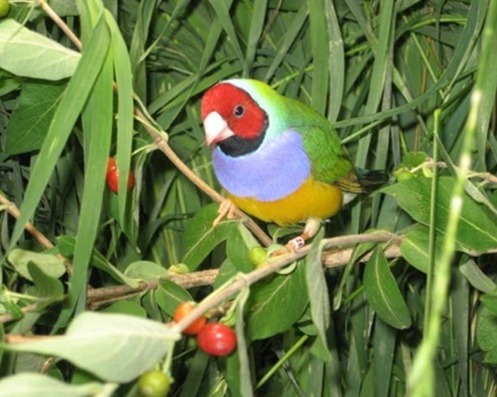 ​Most birdkeepers believe that plant medicines are less effective than conventional medicines, and that we need to reserve conventional medicines for life-threatening situations. I used to believe this too. But as I have delved deeply, daily and experientially into using herbs and essential oils for birds, I have come to feel that the opposite is true. At this point I would not use conventional medicine for life-threatening situations unless there was no alternative available to me. Having witnessed the power of plant medicine in my own flock, I now feel that plant remedies are not only significantly safer than chemical medicines, but that in most cases, they work more effectively. Plants and birds have evolved in such intimacy that birds respond quickly and efficiently to herbs, and if we choose our plants wisely, we can go much farther than conventional medicine to minimize suffering and discomfort in our avian companions.

I remember one night many years ago when my dog Tico got into a terrible fight with another one of my dogs, and collapsed in what appeared to be a state of fatal shock. I rushed him to the local vet (this was an after-hours emergency). His gums were white and he was barely breathing. The vet told me that he was hemorrhaging internally, and that he was minutes away from death. She did not feel that there was time to save him with conventional means. But she happened to be a homeopath (what luck!) and she asked me if it would be OK to give him homeopathic arnica. Of course I agreed, and within a couple of minutes Tico began to breathe normally and the color began to return to his gums. He was fully recovered by the following morning. Apparently, because of the way homeopathy works, the arnica was immediately able to signal Tico's brain to stop the bleeding. In retrospect I can't think of another way we could have saved him. This was the case that made me realize the limitations of conventional medicine most fully; it also made me realize that it wasn't the plants that had limitations, it was my knowledge of how to use them. And this has proven entirely correct: the more I learn, the more effective I become with the "serious" situations for which I previously would have reached out to conventional treatment.

Over the past two decades, a combination of intensive research and plenty of hands on experience has taught me that plants can do things that conventional medicines simply cannot do. For example, I know an herbalist who cut off the end of her finger and used cayenne and comfrey root to regrow it. Comfrey root actually has the ability to stimulate the regrowth of bones; I know several other people who have used comfrey root to regrow bones after terrible fractures that were not expected to properly heal. Or, as another example, herbs like red clover, violet leaf, dandelion root and yellow dock can cleanse the blood, removing toxins such as hormone residues, metals, pesticides and synthetic chemicals. Hawthorne berry can heal and rebuild healthy tissue in the heart. Frankincense (herb and essential oil) can reduce malignant tumors without harming the host. Herbs tend to work gently in terms of side effects, but their accomplishments are often nothing short of heroic.

I believe that the effectiveness of herbs can be attributed primarily to their biochemical complexity. Because they have so many biochemical constituents to work with, herbs can be used to restore normal functioning to body systems and organs. With a thoughtful use of medicinal plants we can correct the underlying physiological changes that result in thyroid or heart disease, for example, thereby effecting a true cure for those conditions. In contrast, conventional medicine will typically apply specific chemicals (after a disease is in place) to compensate for a heart that cannot pump blood properly or a thyroid that cannot produce the proper amounts of hormones; however these types of chemicals cannot correct the root causes of these diseases, nor are they intended for that use.

Plants contain inherent wisdom about how to perform functions such as cleansing a liver, reducing inflammation in lung tissue, or normalizing hormonal fluctuations, which enables them to correct the root causes of many diseases. In contrast, conventional medicines tend to treat the symptoms of these diseases without treating the root causes. Treating symptoms without treating the root cause of a disease tends to make the disease worse and leads to the need for increasing numbers of drugs to treat an increasing array of symptoms. Birds simply are not physiologically tough enough to adapt to lives of chemical dependencies; therefore it makes more sense to me to work with plant protocols to restore their health at the first sign of disease before they develop too many medical problems to be saved.

Plant chemistry is so complex that only a fraction of the medicinal constituents of most plants have ever been identified. Volatile oils (known as essential oils when extracted from plants) comprise only about 2% of any given plant (and many plants containing no volatile oils are still potent medicine). Within volatile oils, researchers have found hundreds of medicinal compounds, all of which work in synergistic harmony with one-another as well as with the compounds found in the other 98% of the plant, to produce a vast array of medicinal effects. By contrast, most conventional medicines have only one or two medicinal effects. This contrast becomes particularly significant when we compare natural and pharmaceutical antimicrobials. Whereas most antimicrobial plants will attack a broad spectrum of bacteria, fungi, viruses and parasites, conventional remedies usually target only a narrow range of organisms. In other words, pharmaceutical antimicrobials use one or two chemicals to combat a small number of microbes; plants use a multitude of constituents to attack a broad range of microbes. For this reason, conventional medicine necessitates frequent labwork to determine exactly which pathogen is present and which antibiotic might be effective. With plants, labwork is rarely needed because once you recognize the signs of infection, you simply select a broad spectrum herbal remedy, and it will usually eradicate whatever pathogen a bird might be harboring at any given time. In addition, because chemical antimicrobials are so specific in their action, and their chemistry is generally relatively simple, pathogens readily develop resistance to them by "figuring out" how to get around their chemical structure. Plants are simply too biochemically complicated for pathogens to understand, consequently resistance is rarely seen in plant medicine.

At the same time that I have experienced positive results with herbal medicine for birds, I have not experienced good results with conventional avian medicine. Not only do conventional medicines have harmful side effects of which we are all aware; they also have a high failure rate in birds. I would not say this about conventional medicine for mammals (although I still prefer to use plant remedies for mammals), but it seems that birds are less equipped physiologically than mammals to metabolize synthetic drugs and to handle some of the more invasive methods of administering the drugs.

When I first began keeping birds in 1992 I used to take my birds to the vet constantly. As a matter of fact, I had two vets because I needed a vet so often and I was experiencing so many emergencies that one or the other vet was frequently unavailable when I needed them. But within a couple of years I began to realize that my birds were not responding well to veterinary interventions. I began to realize that when I was driving a bird to the vet, that bird was probably not going to survive. Numerous other birdkeepers told me that they had stopped taking their birds to vets because "they always end up dying". Well, of course that was not entirely accurate, but there was a truth to it that bothered me. I began to study alternatives to conventional medicine to see if I could become more self-sufficient, and so began a long happy journey into the world of phytomedicine. I do, however, feel that conventional avian medicine is invaluable when it comes to diagnostics, therefore I generally consult my vet for a concrete diagnosis before launching into herbal treatment.

Over the years, my birds have astounded me by responding so well to herbal remedies. They tolerate them beautifully. I have never seen a serious side effect yet and I have used all kinds of wildly experimental plants in my efforts to cure some of the most challenging diseases in aviculture (I'm afraid I've had to deal with most of them). Birds seem to have a symbiotic relationship with plants whereby they can utilize more plant constituents than humans can, and it even appears to me that the plants may be more medicinally effective in birds than in humans. I have used plant medicine to resolve diseases such as avian herpes, proventricular dilitation disease, giardia, polyoma, liver disease, and drug-resistant infections - all diseases for which conventional avian medicine has little to offer. I am infinitely grateful to have found a way to ease the suffering in companion birds who so often find themselves debilitated by their captive lives. Of course a life in the wild would be better for them, but to reunite them with living plant foods and effective plant medicines has brought me a lifetime of challenges and joyful outcomes.